Ariel was born and raised in Oakland, attending Oakland Senior High (go wildcats!) and Carrington College for Medical Assisting. She is the mom of  Bryce, a very energetic youngster, and  enjoys do-it-yourself projects and natural light photography. She relishes working with children and getting to know all of our families.

Jackie Faye Horwitz: Oakland
Jackie has been working with her pediatrician husband, Dr. Horwitz, for many years. She currently works part-time as a receptionist staff member in the Oakland office and knows many generations of our patient families.

Leticia Pelayo: Castro Valley
Lety started at PPMG in 1998 when Dr Ducker joined the Group. She is bilingual in Spanish/English and is the Accounts Receivable Coordinator and Billing Specialist for the entire Practice with her office in Castro Valley. She braves the commute from Tracy on a regular basis!.

Anne Galli: Alameda
Anne is a front office staff member, Care Coordinator and Site Coordinator for our Alameda office. She started with one of the founding physicians in 1988 and has been with PPMG since 1996. Anne is the "go-to" lady for both clinicians and patients. She is in charge of coordinating your referrals and keeping the office running smoothly.

Heather Pesapane - Human Resources Manager
Heather joined PPMG in 2012 and comes with over 10 years of HR experience. She has three children of her own and also runs a very successful certified swim program for infants -6 year olds.

Josen, bilingual in English and Tagalog, is a certified Medical Assistant who attended Merritt College and achieved the academic honor list. She also attended nursing programs in her native Philippines. Since joining the staff at PPMG, she has easily functioned at the front desk as well as with direct patient care. She hopes to eventually go back to nursing school  but in the meantime, we are enjoying her many skills.

Bev Thompson: Oakland
A PPMG front office staff member since the offices merged in 1996, Bev started with Dr. Horwitz and his solo practice in 1991. Jack of all trades, she is the "go to" person Care Coordinator, the  Oakland Site Coordinator, and Administrative Assistant for the whole Practice. Camping with her family is her favorite past-time.

Alejandra Rios: Oakland
Since 2004, Alex  has been a  key Oakland staff member, and usually the first to greet you and get you checked in!  She is fluent in Spanish and her creativity abounds with special projects and keeping the Oakland office seasonally decorated. In addition to receptionist duties, she has taken over the Accounting Assistant and Supply Manager roles as well.

It was in January of 2003 that Chris first started greeting families at the front desk in our Castro Valley office.  She took a 12 month break and we are fortunate to have her back with her very winning smile and positive attitude. She is an avid Giants fan and when not at a game, enjoys other outdoor activities.

Alma holds a Medical Assisting certificate from Merritt College in Oakland and is bilinqual in English/Spanish.Her passion is to work with children and her calling has been the medical field. She enjoys making people laugh and at the same time takes her job seriously with a professional approach. She is the mother of a bright boy, is happily married, and enjoys dancing salsa!

Cindy Peinado: Castro Valley
In 1998, Cindy came to Primary Pediatric with Dr. Ducker when he joined the practice. Cindy wears many hats in our Castro Valley office where she is a Medical Assistant, Care Coordinator, Vaccine Supply Manager and Castro Valley Site Coordinator. 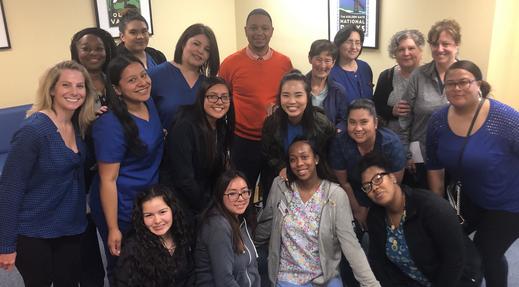 Lupe joined PPMG in the summer of 2016 and has never stopped smiling. She attended Merritt College, obtaining a Medical Assisting Certificate, and is bilingual in English/Spanish. She enjoys hiking with her dog, Rocky, bowling, traveling, and go-cart races.